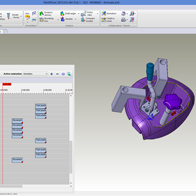 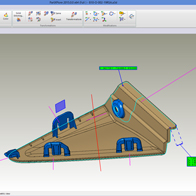 Re-engineered Animation Engine
The animation engine has been completely reviewed to make animation sequences more realistic whilst making the animation creation process much simpler. In this new version, animation creation is time-based and no longer according to the number of positions. Several movements for a part or a group of parts can be defined. These can be simple individual movements or a set of combined movements. This new process means that all movements within an assembly can be validated and, for example, allow collisions to be detected or be used in conjunction with procedural documentation to ensure correct assembly.

Batch Mode File Conversion
A new, independent tool for converting very large native or standard CAD files (or a large number of files) to the WORKXPLORE format. In previous versions, the application could not be used during the file conversion process. From now on, file processing is fully automated and is totally transparent. Users can continue working normally with the application.
Requests for conversion can be triggered by the user or the tool itself if it has been programmed to process certain files at predetermined locations when they are modified or created.

Entity Management Improvements
All entities - both model and wireframe - which are present in the CAD file are shown in the assembly tree structure.
A tree assembly search function based on entity names is now available and wildcard characters (* and ?) are also supported.
Entity management is now much easier; they can be searched, grouped together, classified...

Surface « patching »
It may occure that certain part surfaces are missing after a file has been imported and this can be detrimental when analyzing a part.  The new surface patch function allows this problem to be resolved. Users can now create surfaces by defining contour curves and if these are based on existing surface edges, patched surfaces can be made to be tangent to the existing surfaces. Internal curves can also be added to give a better definition to the form of the patched surfaces.
Numerous features and improvements...
The wide range of new features and improvements introduced in this new version offer greater flexibility to WORKXPLORE throughout the whole production process, including steps such as purchasing, quotations, design and marketing.
-    Generating bills of Materials,
-    Line thickness selection of dynamic sectioning,
-    Solidworks Import,
-    Link curves,
-    Importing Solidworks 2D...