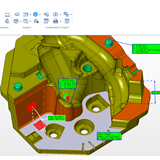 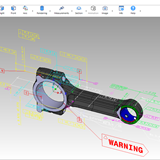 The software was created to efficiently import and analyse all file types and sizes at high speed. It often takes less than half the time to open a file compared to the original CAD application… and this new batch converter function speeds up the overall process even more.

Batch Converter is a new application unveiled in the WORKXPLORE 2018 R1 suite that allows batches of CAD files to be converted to the WORKXPLORE format, instead of having to convert them one at a time. Once launched, it does not require any user intervention, other than to check the current conversion status.

Other items of new and enhanced functionality include support for 4K screens. WORKXPLORE Product Owner Luca Clerici says: “As this kind of monitor is becoming more widely available, we’ve ensured that the system works efficiently on 4K laptop screens and external monitors.

“We’ve also improved the software’s powerful Client Viewer. The tool already enabled users to communicate 3D parts and assemblies to sub-contractors, customers or colleagues via the internet, through a stand-alone lightweight application. Now, they can also export GD&T data with the solid model.”

An additional STEP reader translator option has been introduced in WORKXPLORE 2018 R1 that allows users to choose between the faster in-house integrated import library, and the slower, but higher quality, Datakit converter.

A new option has been added in Parameters to allow the detection of multiple meshes while importing an STL file. “This was included because a lot of time can be spent working with large meshes. By simply asking Information on the mesh, the system shows the number of shells contained in the model.”

Luca Clerici concludes: “Overall, the new and enhanced items of functionality in WORKXPLORE 2018 R1 save users more time, and improve their ability to perform part diagnostics, create assembly instructions and prepare the production of 3D models.”